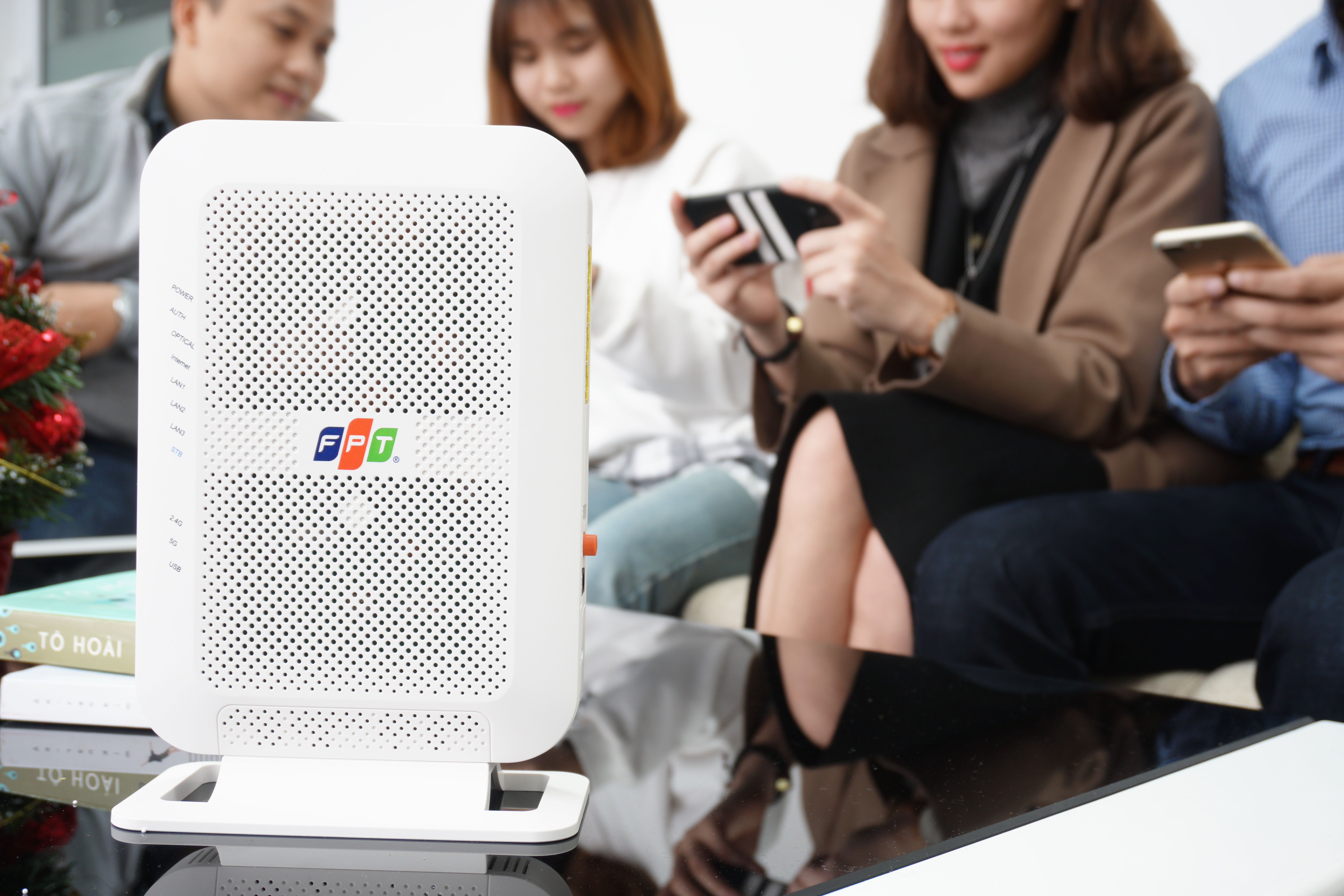 Dual-band Wi-Fi Modems utilizing the 802.11ac Wave 2 MU-MIMO standard are equipped with remarkable technology and aesthetic design.
Accordingly, all new subscribers to FPT fiber-optic Internet (FTTH) in Hanoi and HCMC will be equipped with new Dual-band Wi-Fi Modems utilizing the 802.11ac Wave 2 MU-MIMO and 5Ghz Wave 2 MU-MIMO standard with modern technology and very simple configurations. This is the Wi-Fi Modem generation working in both 2.4Ghz and 5Ghz frequency bands at the same time with the most outstanding ability to avoid interference. With the new equipment, customers will have the opportunity to fully experience utilities of the fiber-optic Internet transmission such as faster speed, more stable signal as well as almost no interference when multiple users and devices operate at the same time, even working online, streaming 4K, playing games online, etc. Particularly, as all new lines of smartphones, laptops, and tablets are equipped with dual-band Wi-Fi, this new line of modems will help customers maximize the performance of their devices.

Listed charge rates of all fiber-optic Internet package will remain the same as the current price policy, the cost of materials will be determined for each service package and the special offers will depend on the payment methods that best supports customers.

With 802.11ac Wi-Fi which works in both 2.4GHz and 5GHz frequency bands, each with a width of up to 160 MHz channel, the Modem Wi-Fi utilizing the AC Wave 2 MU-MIMO standard is highly resistant to interference, improves data transfer rate between the modem and the terminals which also support this standard such as Apple: Iphone 6s, Ipad Air 2 or higher, Samsung: Galaxy S7, Note 5 or higher etc. Speed is particularly an outstanding feature of this “two-in-one” Wi-Fi Modem. According to experts, the transmission speed of Wi-Fi Modems utilizing the AC Wave 2 MU-MIMO standard is 867Mbps in the 5GHz frequency band with the width of 80Mhz, which is 3 times faster than that of the previous standard Wi-Fi with the same numbers of 2x2 Antenna; the possible theoretical maximum speed is 6.77Gbps in the 5GHz frequency band when using 8x8 Antenna, which is 11.5 times faster than the old 802.11n. This equipment will help business customers in particular and Internet users in general to convert business and life apps to cloud computing platform and IoT.

In addition, the lean design with antennas hidden inside the device itself but still ensuring maximum performance satisfies the aesthetics and helps prevent damage due to Antenna breakage. This is a remarkable design advantage compared to dual-band modems with multiple external antennas on the market today.

The device is officially provided to new FTTH customers in Hanoi and Ho Chi Minh City from January 2018 and will be available in other provinces in near future. For more details on the equipment and sales policy, contact free hotline 18006000 or customer support call center at 19006600.